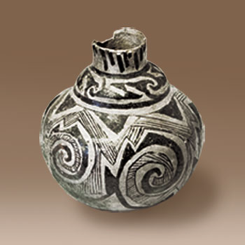 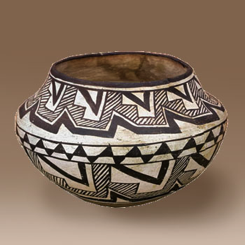 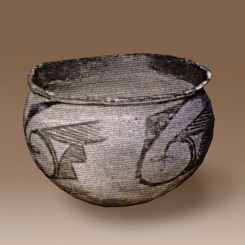 THE ARBITRARY DIVISIONS. THEY'RE ALL ANTIQUE.

When you're talking about the pottery on this site, the word "antique" doesn't apply. Instead, dealers and scholars use five categories to describe the relative antiquity of Southwestern work. Lately, the line between "historic" and "modern" has blurred considerably.

Prehistoric — prior to 1500 A.D.  The date reflects the Spanish entrada to North America. Prior to 1500, Native art was traded widely

Protohistoric — 1500 to 1650.   During these years, tribes and Pueblos settled into the places where they live today. Recorded history

in the Southwest begins with Coronado in 1540, but Natives had limited contact with Europeans and art remained largely

Historic – 1650 to 1870.  The period of greatest rarity, when Spanish Missionization ended inter-tribal trade.

Modern – 1870 to 1950. Once the railroads came, Anglo tourists and traders encouraged the art. During those years, the artists kept

close to their tribal groups and had little contact with collectors, mostly selling to traders who spoke their languages. This practice

persisted through World War II and for a few years after.

Contemporary – 1950 to present. In today's world, radio, television and the Internet brought artists out of their tribal groups and into

the art world at large.

Because of the sociological changes during these periods, the Native American art field has come to recognize that pieces made before 1950 came from a different world, and therefore have an antique value. Increasingly, as the pieces become scarcer, dealers now often offer pre-1950 pieces as historic rather than modern.

Any evaluation of Southwestern Native art has to recognize these distinctions. Normally, the antique industry requires that a piece be more than 100 years old to be designated as antique. In the Southwestern field, 65 to 70 years old is more realistic.