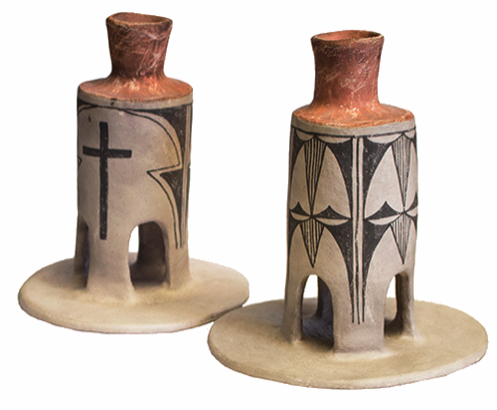 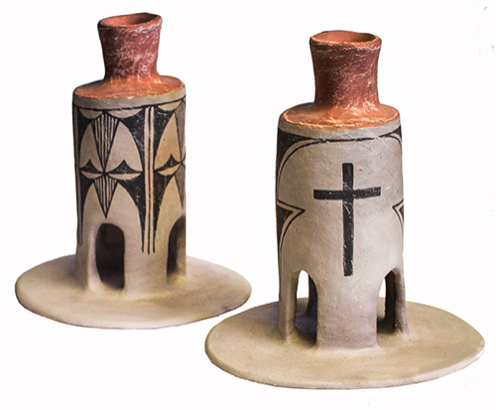 The signatures, left and right 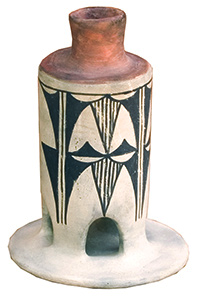 The one we thought was original

Sometimes it seems like everything we find has a story. We bought these at an auction shortly after Michael made these, and we knew he'd made a set to replace a set of 12 made in the 1940s that had been stolen from the Mission at Laguna. That alone was enough to make these desirable, but the story didn't end there. In 2008, we found a more worn-looking, unsigned one and thought we'd found one of the Mission originals. We contacted Michael, sent him a picture and got another surprise. He said, "No, I made that one, too." He'd made yet another set, but it also got stolen, this time from the flea market in Santa Fe. As these things will, it made it through channels and found its way to a reputable dealer who never would have bought it if he'd known it was stolen. We gave it back to Michael, and in return, he offered to make us a piece. We have a scuba-diving friend that we owed a favor, so he made us a canteen shaped like a fish.

Michael is one of our favorite potters. One observer dismissed his work as "just doing fake prehistorics," but we felt our faith was rewarded when we saw that a few years after the turn of the millennium, the Museum of New Mexico devoted a full case to his work, all of it instantly recognizable not as wannabe prehistorics but as genuine Michael Kanteenas. We think enough of his work that we gave a featured position to six of his pieces, including these candlesticks, on page 102 of our Second Edition of Southwestern Pottery, Anasazi to Zuni.