Because of its design, this is a rare piece. It shows its age because it was treated as a family utensil, and it reminds us that not every fine hundred-year-old olla got taken home on the train and placed safely on a shelf. Puebloans live with art that's made to be used, and they use it. The design is so unusual that the word "rare" seems appropriate. The hundreds of pieces shown in Harlow and Lanmon's comprehensive The Pottery of Zia Pueblo confirm that Zia potters used the same designs again and again, and Zia pieces are generally instantly recognizable as Zia. Although the book devotes an entire chapter to pieces that offer variations on a single design, Zia potters achieved an immense variety of designs in the way they mixed the traditional elements, and many Zia pieces achieve a never-seen-anything-like it appearance. Having said that, the major elements of this design appear to be unique. We've never seen this neck band design or petal-and-stylized-feather design on any pots we've ever seen or seen pictured, and we've never seen another Zia piece that uses empty space to such dramatic effect. We put this on page 185 of our Second Edition of Southwestern Pottery, Anasazi to Zuni, where it sits alongside its contemporaries, many of which got similar rough treatment. And none of which look anything like this.

No restoration or repair. It just shows its history. 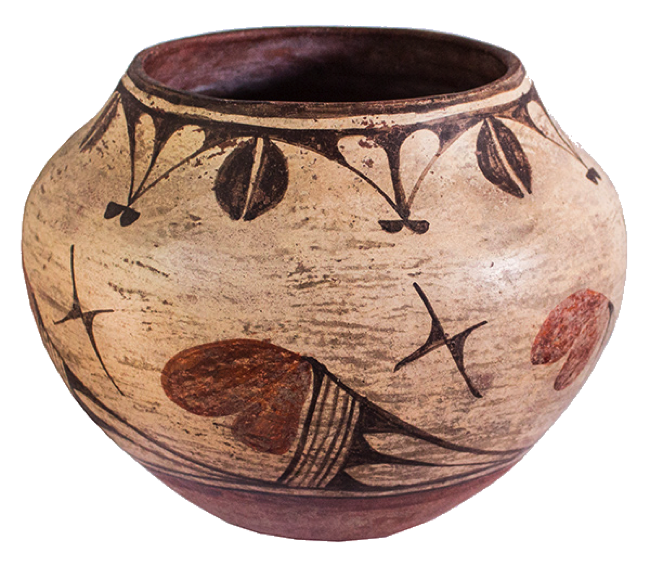 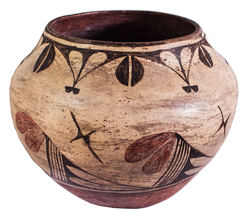 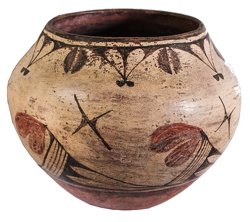