MARICOPA BLACK ON CREAM CARAFE AND CUP circa 1920

Early in the 20th century, as the Maricopa Indians realized that pottery made for tourists was becoming the tribe's primary source of income, they searched for shapes that might appeal to the tourists. We've never seen this cup-and-carafe combination anywhere else in Southwestern pottery, but we've seen another from Maricopa, a black-on-red that appears on page 147 of our The Desert Southwest, Four Thousand Years of Life and Art. We put this one on page 200, which might have been a bit unfair. To us, this one seems even more out of the ordinary than the red one, and we probably did it a bit of disservice by relegating it to the back of the book and placing it alongside early kitsch pieces. The unusually pale cream color, the intricate design and the red interior set this aside from other pieces from the 1890–1925 period. The design has some Tohono characteristics, but the polish suggests Maricopa, and the fact that the only other one we've ever seen is clearly Maricopa makes us confident of a Maricopa origin. Fortunately, this never seems to have been used as a working crafe. Because the interiors of the cup and carafe aren't polished, it probably would have deteriorated pretty quickly if it spent much time holding water.

Condition very good. Paint on body of carafe is faded, as evidenced by the darker color on the carafe neck. 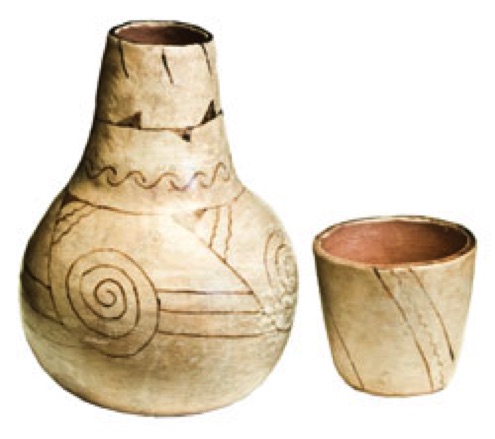 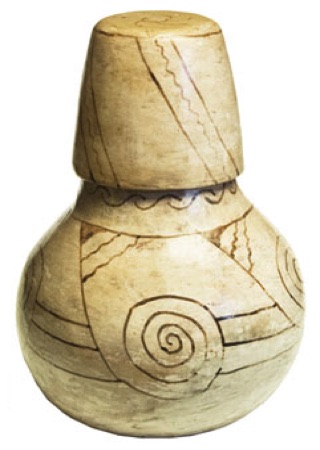