MARICOPA BLACK ON RED JAR circa 1970

This is an important piece in that it's exceptionally large for a polished black on red jar. Barbara Johnson was one of the most prolific potters of the 1970s Maricopa pottery revival. This was a flurry of activity led at first by Mabel Sunn, Barbara's mother, and by Ida Redbird. Ida died in 1971, Mabel followed in 1980. Barbara, Her sister Gertrude Stevens and Phyllis Johnson Cerna kept the movement alive at a dwindling pace. In the 1980s, Maricopa pottery production died down and stayed dormant until younger potters came along in the late 1990s. When we bought this in the late 1990s, it had a couple of bites out of the rim. We repaired them and it later spent a couple of years on consignment in Scottsdale. When it came back to us, the repairs were so good that we're not sure where those chips were. This appears on page 52 of our Pottery of the Southwest and on page 95 of the First Edition of Southwestern Pottery, Anasazi to Zuni.

Condition excellent after undetectable repair of two chips in the rim 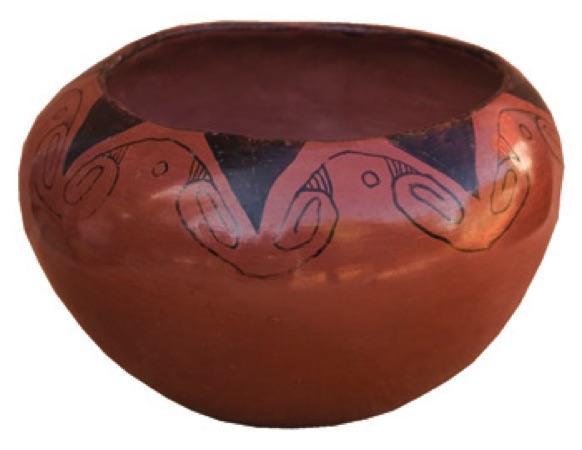