Back in 1992, when we started collecting pottery seriously, this was the first Zuni pot we bought. We couldn't have started in a better place. At the time, Zuni Pueblo had a store in San Francisco managed by Jim Ostler, the author of the 1987 Zuni Pueblo Pottery, and the people at the store told us that Priscilla, her brother Anderson, her sister Agnes and Anderson's wife Avelia were important potters. We brought this little bowl home and took the message to heart. Later, when we wrote The First Edition of Southwestern Pottery, Anasazi to Zuni, we devoted two of the six pages we gave to Zuni to the Peynetsa family, and they still have two pages in the Second Edition. Anderson started potting in the eighth grade under the wing of Jennie Laate, who taught at Zuni High, and by the mid-1990s was generally acknowledged as Zuni's leading potter.

This was a touch unfair to his older sister Priscilla, who was learning from Jennie at the same time. She seemed to have skills equal to Anderson's and, in our opinion, might even have been a slightly better painter. However, her career took a calamitous turn in 1995. She lost an arm in an automobile crash, and over the next years, laboriously learned how to make pottery again. She continued painting and gradually learned how to form a pot with one hand. She still works, but the process is laborious. Post-1995 pieces by Priscilla are scarce, although they maintain the quality that you see in this piece. We cared enough for it to use it as our Zuni example in an Acoma-to-Zuni coupling in the Afterword on page 188 of the First Edition of Southwestern Pottery, Anasazi to Zuni. It's also on page 33 of our Pottery of the Southwest.

Condition excellent. We took good care of it. 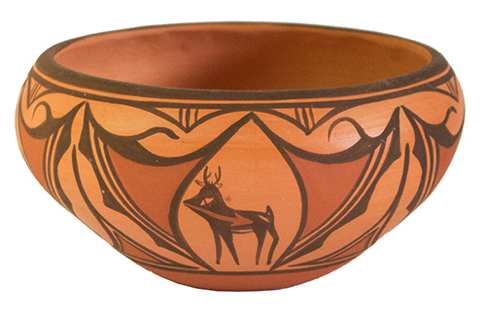 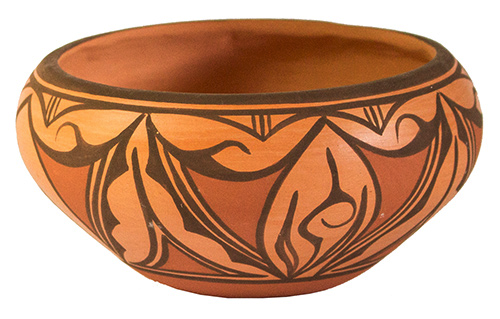 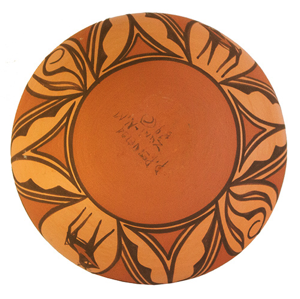