This beat-up bowl is fully entitled to one of our green dots. It's a wonderful piece of history, both because of its pre-railroad age and especially because of where it traveled. We bought this in 1996 from a dealer who got it at an auction in a box of mixed minor Southwestern items deaccessioned by Stanford University. We knew right off that it was unusually old and thought about dates ranging from the late 18th century to the end of the 19th. Several things made us feel it was earlier that the post-1880 date one normally assigns to brown-bottom Zuni bowls. Harlow and Lanmon's authoritative The Pottery of Zuni Pueblo dates Zuni Polychrome as a style from 1840/1860 to 1920 and the earlier Kiapkwa Polychrome from 1760 to 1840/1860. The designs on the outside of this bowl go way back and persisted through both styles. The design on the interior doesn't help much. We've seen the spotted wing design on the bowl's interior inside a bowl that the Smithsonian collected in 1884 that's shown on pages 190 and 191 of the Second Edition of our Southwestern Pottery, Anasazi to Zuni, and we also have an 1870-vintage red-bottomed bowl that has the design. Three things made us think that this piece is earlier than either of those. Although it doesh't show in the pictures, the bowl exterior has a high polish, which we seldom see on Zuni Polychromes. The rim has a fattened reinforcing, something we've noticed in a more exaggerated form on a 17th-century Zuni bowl and haven't seen on any post-1880 pieces. And perhaps the most telling evidence of age, it had been excavated and still had the dirt smell when we got it.

To confuse us totally, it had an irrelevant paper label. By the time we bought this, we'd already visited the Puye ruin and knew it had nothing to do with Zuni. It's on a mesa just west of Santa Clara Pueblo, was abandoned in the 16th century, and an attribution of this piece to Puye is so wrong it's laughable. We questioned it with Stanford, who told us don't bother us, if it came from us it must be correct. The years passed and the pot sat on a shelf in our home until 2015, when we made a return visit to Puye, and suddenly the label made sense. On our first visit, we'd walked past a boarded-up building on our way up to the mesa, and in 2015, we found out what it was. Some time in the early 20th Century, Fred Harvey had built it as a visitor center, the only Harvey House ever built on an Indian Reservation. By 2015, Santa Clara had reopened the Harvey building as a gift shop for visitors. A hundred years earlier, when Harvey got this ancient-looking, dug-up pot, most likely salvaged from a collapsed room in an old Zuni house, they sent it to the shop at  Puye, where it would have seemed appropriately ancient, perhaps like something from the ruins.

Condition as it appears 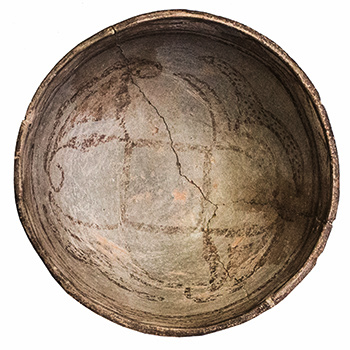 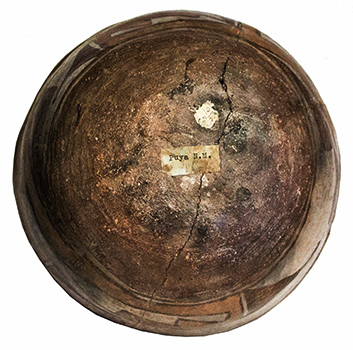 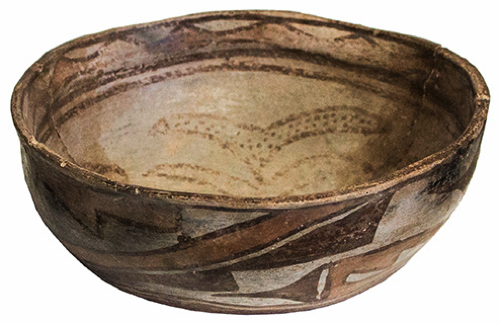 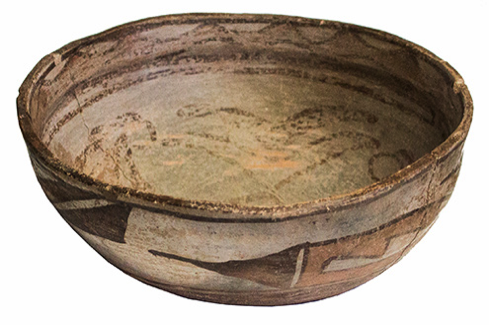 The mysterious sticker. We explain what we learned in the text above.