We bought this completely traditional Mojave doll directly from Betty Barrackman in 1998. She made it the way the Mojaves had made these dolls for more than a century, intending it to be one of a group of pieces she was sending to the then-new Mashantucket Pequot Indian Museum in Connecticut. She was one of the three most important 20th-century Mojave potters, and we devoted pates 142 and 143 of our The Desert Southwest to her, Annie Fields and Elmer Gates. She lived in Needles and was an important figure intribal activities, was probably the last surviving traditional Mojave potter (unless Matt Brenner outlived her), and certainly the last to be active. This was the most recent piece of Betty's we were able to acquire from her. This also appears on page 117 of the Second Edition of Southwestern Pottery, Anasazi to Zuni and on page 57 of our Pottery of the Southwest. 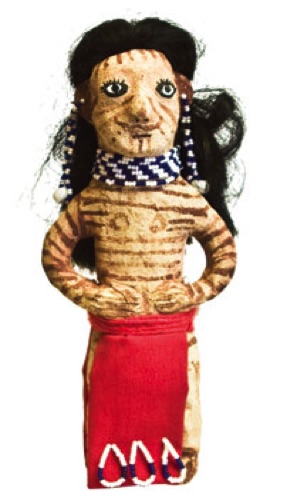