Mabel Sunn was one of the pre-eminent Maricopa potters of the mid-2oth century, and she's largely responsible for the best documentation we have of the pottery of the period. In 1970, Mary Fernald wrote a master's thesis, and she talked Mabel Sunn into showing her how to make Maricopa pottery. Eventually, the thesis turned into the 1995 book Dirt for Making Things, and much of what we know about Maricopa pottery today came out of that book.This difficult-to-make shape became a trademark and a bragging point for Maricopa potters during the 20th century, and this is an excellent, larger-than-most example made by one of the top potters. At first, we hought this might be by Mary Juan, whose skill level surpassed her contemporaries, but when we looked at it longer, the design pretty clearly identifies Mabel. It's had a little repair around the rim, but otherwise, it's in excellent condition. This appears on page 52 of our Pottery of the Southwest. 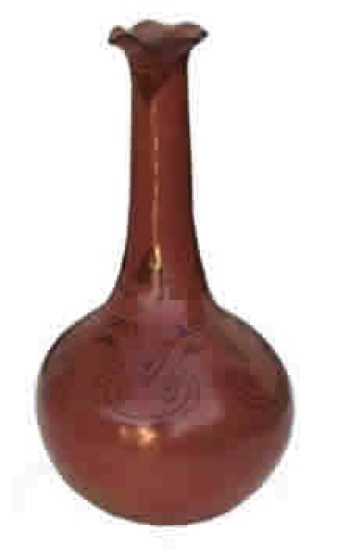