This is superbly painted, decades ahead of its time. We weren't aware of Marie Torivio,, but this makes it clear that we should have been. Like many other talented artists, Marie Torivio is largely forgotten today. Early in our collecting, a 1987 piece by her daughter Nelda Lucero captivated us so completely that we gave it a place of prominence in the first edition of our Southwestern Pottery as an example of the finest Acoma pottery of the moment. Her mother made this ten years before that, and its design is so clean and fresh it looks far more contemporary than her daughter's piece. This came with some history. There were two tags inside. One explained that a dealer had bought it in the late 1970s and wanted to keep it to study, The other showed a Lucy Lewis pot. You were supposed to see the Lewis picture and realize that this was a good pot too. Today, if you put this next to that picture, the Lewis pot looks clunky by comparison. You can find a few pieces by Marie on the Internet, but none of them have the grace that this exhibits.

A pottery purist might point out that the pot a bit heavy, its rim is uneven and its interior is casually finished. Forget all that. Just appreciate magnificent design and painting. 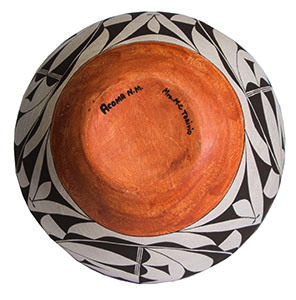 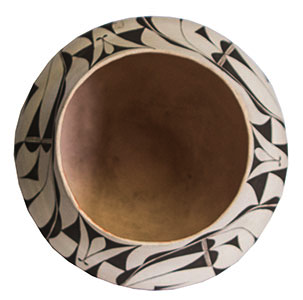 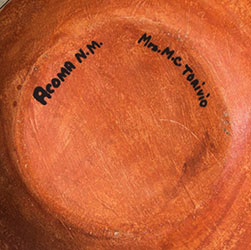 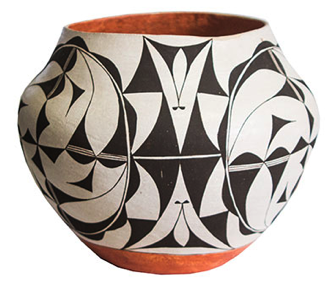 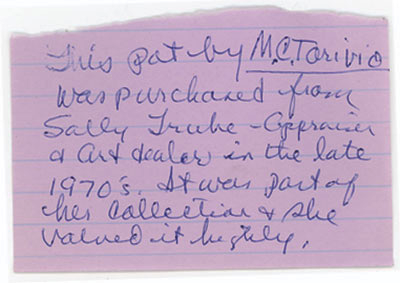 Both these tags are inside the pot The pot in thje picture is by Lucy Lewis..