This is a remarkable piece. We love the old and unusual, and we love the great potters. Jessie Garcia stands alongside Lucy Lewis and Marie Chino as a driving force in shaping Acoma pottery in the second half of the 20th century. She did all the things Lucy and Marie did and a bit more. We've seen plain gray pieces by Lucy and undecorated pieces by Marie. It's as if they all had to prove they could do more than paint intricate designs. They used corrugation to expand Acoma's design vocabulary, and nobody did corrugation better or more often than Jessie, but they almost never did plain-surface undecorated pieces, and except for Jessie, didn't use this peach-colored slip. We've seen thousands of pieces from Acoma, but the only other ones we remember having this slip are the 7" diameter bowl by Jessie from 1965 pictured below and a 1992 commercial clay piece by Jessie's son-in-law Wilfred Garcia that we showed on page 188 of the First Edition of our Southwestern Pottery, Anasazi to Zuni.

This one, with the sculptured applique, doesn't look like anything else we've ever seen from Lucy or Marie or the other Acoma giants, either in form or in color. The only thing we can say for sure is that, as we've learned more about the range of design experimentation that went on at Acoma in the late 1950s and 1960s, this makes perfect sense from Jessie Garcia.

And from nobody else.

it doesn't have any of the spalling that

was almost universal at Acoma during 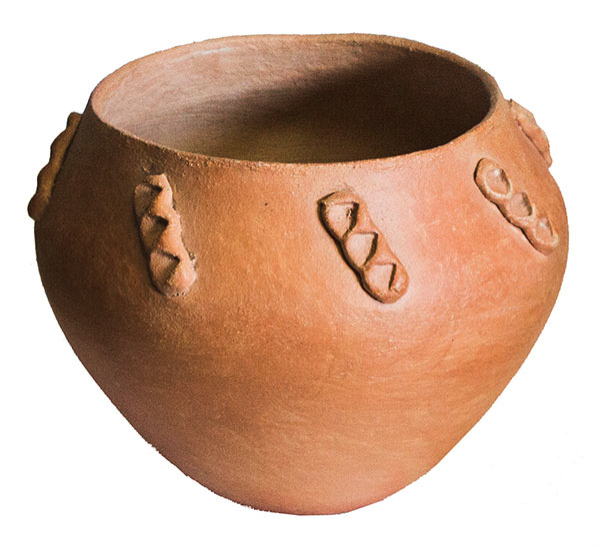 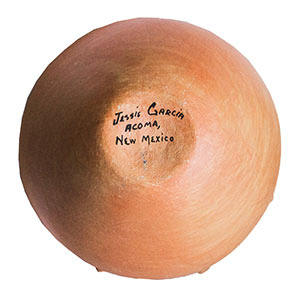 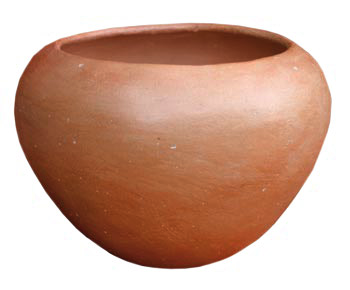 We bought this at an auction in 2008 and sold it immediately for $360. We thought it was rare then, and we still do.