John Barry's 1978 American Indian Pottery listed Priscilla Vigil as "still making traditional pottery." Her micaceous pieces appear in Schaaf's Pueblo Indian Pottery and in the First Edition of our Southwestern Pottery, Anasazi to Zuni. An honored member of the Traditional Elders Circle, she began exhibiting at Indian Market in 1933 and showed her work as recently as 1992 at the Smithsonian Festival of American Folklife and the New Mexico Folklife Festival. We put a painted piece by her in the Second Edition of Southwestern Pottery and in our Pottery of the Southwest, where we dated it as circa 1970. With 20/20 hindsignt, we now think ten years earlier is a better guess. The stickers on the bottom her pieces tell an eloquent story. The $2.50 price on this one tells us Priscilla didn't get paid a whole lot for this piece. She got $10 for that not particularly beautiful painted piece.

We have to thank Priscilla Lilly Flower for her affection for red-borderd Dennison stickers from the Five and Ten. She used them on all three of the pieces we've had the pleasure of owning, and on two of them, she spelled Lily with two Ls. 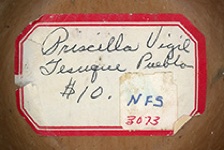 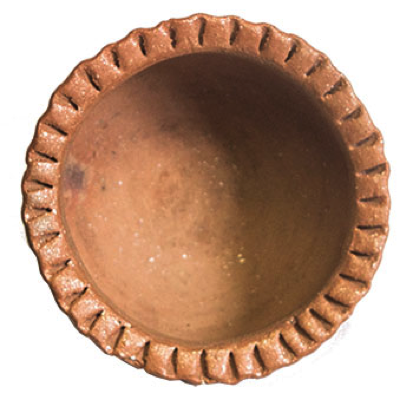 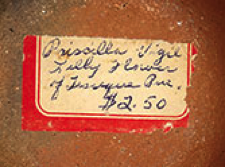 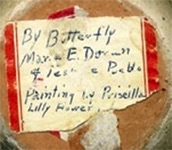 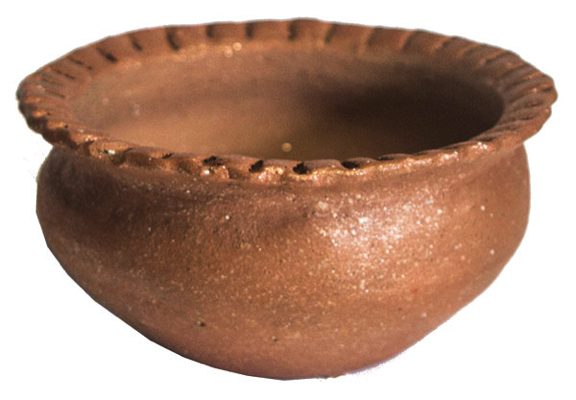 Two other stickers of hers