This large olla with its fine black finish looks like a Santa Clara jar, but the decoration looks like Santo Domingo. Monica Silva was married in from Santa Clara, and she merged Santa Clara and Kewa styles on this piece. She wasn't always appreciated by the Kewa ellders. Leo Crane's 1928 Desert Drums devotes a chapter called "Infernal Affairs" to Monica's travails and includes a photograph of her looking a bit battered. She showed Kewa how to make blackware the correct way, and later potters like Rafaelita Aguilar profited from her example. The Monica Silva attribution on this  piece came with the pot when we bought it, and it's more of a "who else" rather than a hard provenance. Our friend and mentor, the late Dick Howard, who knew Monica well, looked at it and said, "Yeah, could be." This shows up on page 97 of the Second Edition of Southwestern Pottery, Anasazi to Zuni credited to Monica. 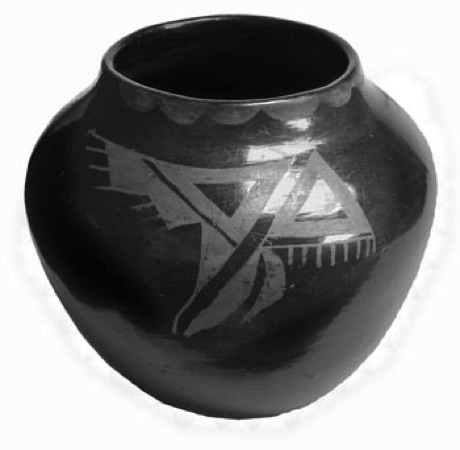