ACOMA BLACK ON WHITE DISH circa 1955

We wondered who made this beautiful little dish until we really looked at the line work and then compared the handwriting with signed Juana Leno pieces from the same period. Although she often printed the word Acoma rather than writing it in cursive, the hand appears to be the same, and to us, the line work was the giveaway. Juana Leno's star is rising, especially since the Haak'u Museum at Acoma's Sky City Cultural Center equated her with matriarchs Lucy Lewis, Marie Chino and Jessie Garcia in its 2006 opening exhibit. Not that she wasn't important before then—National Geographic pictured a triple canteen like the one on page 60 of the Second Edition of Southwestern Pottery, Anasazi to Zuni in its 1976 cover story on Southwestern Pueblo art. 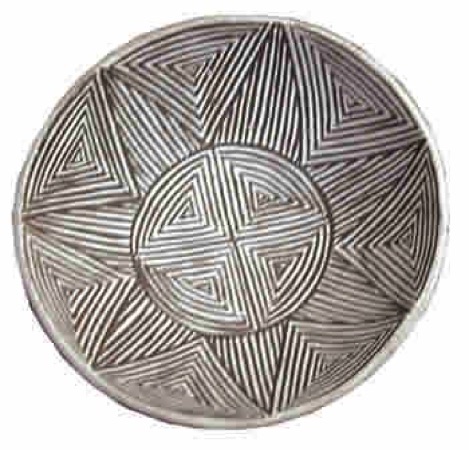