This otherwise modest and typical unsigned tourist jar has a distinguishing feature that sets it apart from hundreds of others—a panel of bright orange slip that might have been imported from Acoma. Orange backgrounds were popular at Zia in the 1920s, but the orange seldom appeared as a decorative element on a white-background piece. A documented 1935 piece by Harvianna Toribio used it, but there aren't many other examples to compare this with. By the time this was made, pottery-for-trade had been Zia's principal industry for almost three centuries. In the early 20th century, Zia potters settled on the roadrunner as their bird of choice, and ever since potters have had fun inventing every possible way to draw them.. 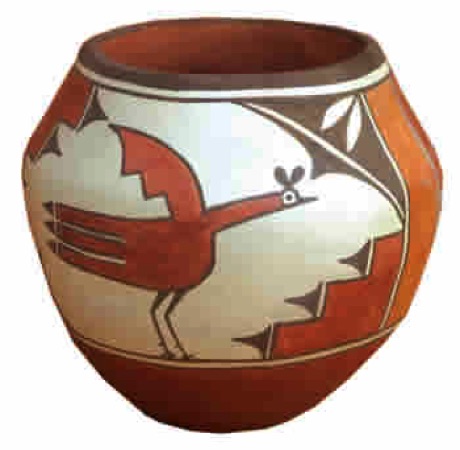 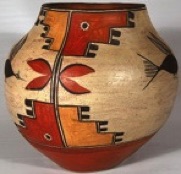 The 1935 jar, courtesy of Adobe Gallery