This noble jar was made for use around the Pueblo, and it was definitely used, as the abrasion around the rim testifies—years of scraping by ladles, scoops and whatever grains the owners kept in it. It's an excellent example of an early 20th-century dry storage jar, carefully made by a highly skilled potter. Despite its heavy use, it survived quite well, suffering only the rim damage and a little paint loss on one side to an inch below the rim, now restored. Variations on this design appear on many Zuni ollas made before 1940. We put a late date on this piece after talking to Dwight Lanmon, who, along with Francis Harlow, wrote the 2008 The Pottery of Zuni Pueblo, the definitive book on the subject. However, at the risk of embarrassment, we're going to overrule him. A recent post by Adobe Gallery offers a magnificent piece with this design dated 1900 to 1920, explains that it and a piece from the Gallegos Collection with an identical design were unquestionably made by the legendary Tsayutitsa (c. 1871–1959), and that the design has definitely been identified as her creation.

Although Lanmon pointed out that this design didn't show up in any collections he knew of that were made in 1913 and before, the Adobe Gallery posting is convincing. According to Lanmon, the earliest documented collections that have pieces with this design have some that some show wear from considerable use. After a few years of thought, we re-dated this from 1925 to 1910. We've seen pieces with this design sold over and over sold as being circa 1900. What we won't do is attribute this to Tsayutitsa, although the design is reasonably faithful to hers. The painting is too casual. This appears on page 191 of the Second Edition of our Southwestern Pottery, Anasazi to Zuni  and on page 33 of our Pottery of the Southwest.

Except for the abraded rim, condition very good after paint touchup 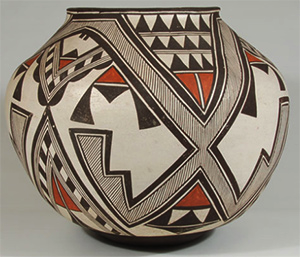 The Tsayutitsa piece, from the Adobe Gallery site 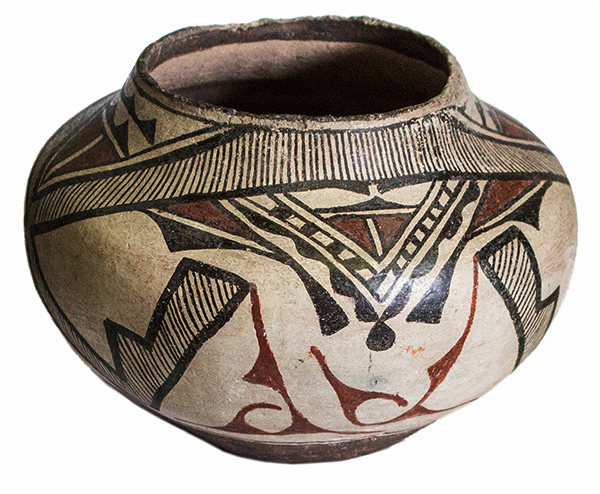 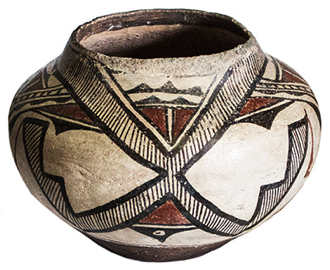 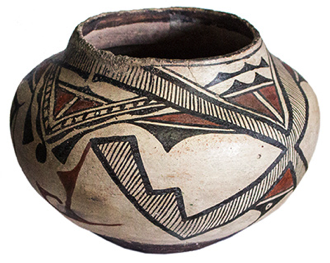 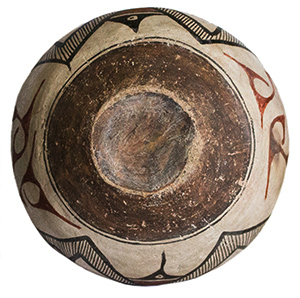