The hatched design on this early 20th century jar has a geometric rigidity that most Acoma jars of the period ignored in favor of more flowing naturalistic motifs. If the jars of the period didn't have parrot or rainbows, they usually had flowers, leaves and flowing swirls. This straight-lines-only black and white design strikes us as unusual for the times. It rings like an unbroken pot, but it's been broken, reglued and restored. If it had never been broken, its price would be much higher. It's on page 53 of our revised Second Edition of Southwestern Pottery, Anasazi to Zuni.

The inside of this jar is something else again. We saw the mysterious cross design in black on the bottom of the bowl and the even more mysterious thin-washed orange circle and cross over it, and we worried that we'd stumbled on something ceremonial that shouldn't have left the Pueblo. We took it to a show in Pasadena and showed it to Acoma potter Carmen Lewis, fully expecting that we'd have to give it to her so she could return it to the Pueblo. Instead, she laughed and explained it all. The black design inside transfered during firing when the potter saved space in her pit and put a smaller pot inside it. The red pinwheel happened when her orange slip inside the rim dripped while she was painting it. She wiped her rag through the drip and swooshed the paint on the rag around the inside to create the circle and cross. So much for dark Pueblo mysteries. 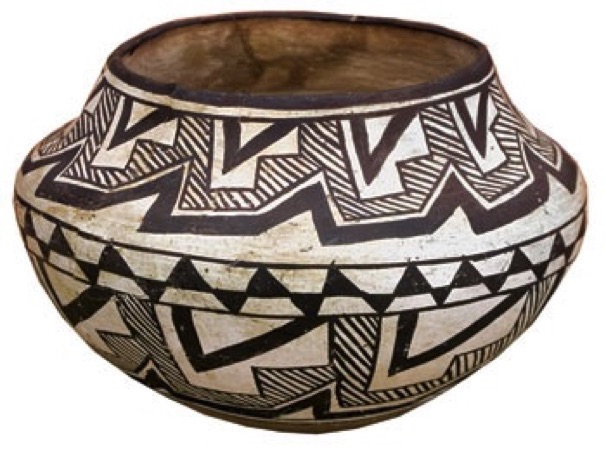 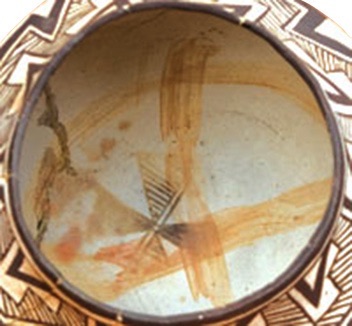