A big, important, truly unusual piece from the early 20th century. We've reviewed the hundreds of pieces in Harlow & Lanmon's exhaustive The Pottery of Zia Pueblo and searched through the dozens of other books about Pueblo pottery we own and have yet to find a jar from Zia, or anywhere else for that matter, with a design like this. It's not that the elements of the design are unusual for Zia. It's just how they come together to produce that's something that's close to unique—a trick Zia potters managed over and over. You can see this piece and the phenomenon in the group photo on page 185 of our Second Edition of Southwestern Pottery, Anasazi to Zuni and marvel at the way early-century Zia potters took the same design elements and made totally different pieces. We may never make a firm attribution on this, but whoever made it was a master potter. This has some surface restoration and a small chip repair but is otherwise intact. This also appears on page 37 of our Pottery of the Southwest.

We recently saw a piece that Steve Elmore and Dwight Lanmon dated as circa 1920 and attributed to Isabel Medina Toribio. It has some similarities to this, especially in what Steve and Dwight call the "repeated capped feather design." We showed this to Dwight and asked about a possible Isabel Toribio attribution. He answered, "Looks possible, but the painting doesn't look quite as crisp as what I associate with her pottery. The designs are certainly related to her pottery." That's as close as we may ever come to an attribution. Various sources give Isabel's birthdate as 1882 to 1889 and 1893 (she died in 1940). If this is her work and if the later birthdate is correct, 1915 to 1920 might be a more accurate date.

Condition very good after restoration. Photos prior to touchup available. 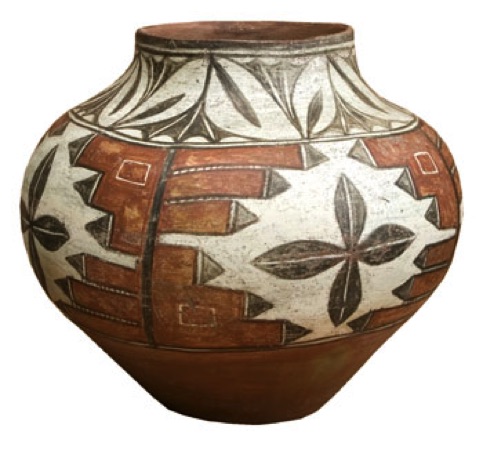