Felicita Garcia wasn't one of the seven Ohkay potters who established this style during the San Juan pottery revival of the 1930s, but she might as well have been. This piece is a textbook example of the earliest pieces in the new style: polished red rim and underbody, matte tan band on upper body and incised geometric line pattern on the tan band with micaceous golden slip rubbed into the incisions. (The mica doesn't show up well in the picture, but it's clearly there if you hold the piece where the light can bounce off the flecks.) It was an attempt to establish an "ancestral" style based on designs from Potsuwi'i Incised prehistoric pottery found near the Pueblo—brownware jars with closely spaced incised parllel lines, probably made by immigrants to the area who showed up around 1450. Incised designs like this were a widespread feature of prehistoric Mississippian and Chihuahuan pottery and had little to do with anything done around northern New Mexico. A 1998 article by Francis Harlow indicates that the micaceous slip rubbed into the incisions is true to the 15th-century originals. Schaaf's Pueblo Indian Pottey entry for Felicita shows a picture of an elegant gray-haired matron but tells us only that she was active from 1950 to 1970. The stone-polished signature is almost illegible, but it's there.

Condition excellent for its age, minor wear around base 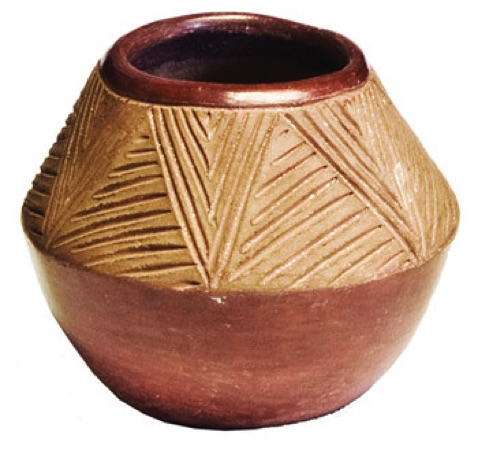 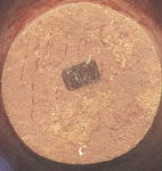