Our ongoing mantra about this site is "old and unusual." This may not be old, but what strikes us as unusual is that in our rapidly changing world an esablished potter from any Pueblo still makes pieces exactly like they've been made for the last century. Every element in this design comes from the old traditions. However, the piece does have one small new wrinkle. Ruby put spots of matte red on the polished red, most noticeable on the capped-feater panels. Ruby's mother, Seferina Bell (1920–1986) ranked alongside of Trinidad and Sofia Medina as a leading figure in 20th-century Zia pottery. This is on page 189 of our Second Edition of our Southwestern Pottery, Anasazi to Zuni, and that picture adds to the story. If you think Ruby is frozen in time, check out the canteen that sits to the left of this. 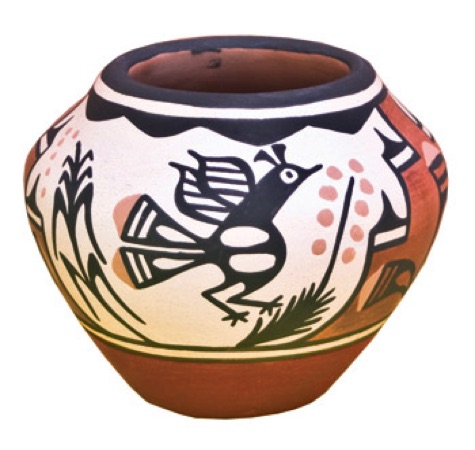