When we first wrote Southwestern Pottery, Anasazi to Zuni in the early 1990s. we studied American Indian Pottery, a 1980s book by John W. Barry. It told us about a small 1970s pottery revival at Ysleta del Sur, a seldom-publicized Pueblo established south of El Paso by Isleta refugees from the 1680 Pueblo Revolt. We made a trip down in 1993, but found no evidence of potters or pottery. We eventually found a couple of minor 1970s pieces to put in our book, then forgot all about Ysleta del Sur until 2013, when we encountered Jerry Dunbar's work. (At the risk of sounding disrespectful, we're using his real-people name rather than the high-flown J. Colt Dunbar he puts on the bottom of his pieces.) Jerry started potting in 2007 and studied at the Poeh center in Pojoaque under the tutelage of one of our favorite potters, Shawn Tafoya of Santa Clara.

This large, hefty wedding vase is beautifully painted with eclectic Pueblo designs. As a definite plus, Jerry's website states, "All pottery pieces are handmade, formed and painted using only traditionally made clay and natural mineral pigments. No commercially made clay or paints are used. No molds or pottery wheel used. All pieces are traditionally fired outside. Kiln-fired pieces will be disclosed." Since Jerry doesn't have a tradition from his own Pueblo, perhaps he can start a new one. We've now seen several pieces, and he's a talent to watch. We put this on page 199 of the Second Edition of our Southwestern Pottery, Anasazi to Zuni. 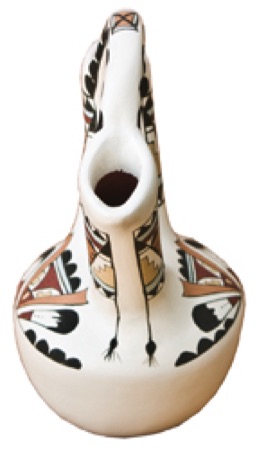 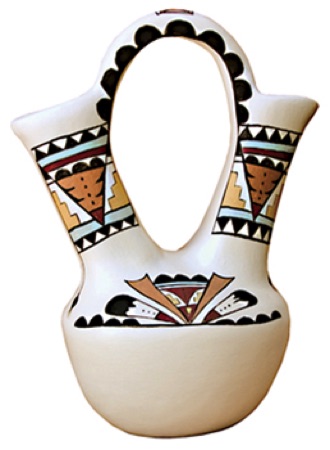