One of the most impressive things we can say about Kimo De Cora's pottery is that both Andrea Fisher and Blue Rain, two of the most prestigious contemporary pottery galleries in Santa Fe, carry his work. We first saw it at Andrea Fisher in the mid-2000s, and we were impressed, especially because important new Isleta potters are few and far between. His pieces are mostly small and borrow or elaborate on prehistoric patterns in crisp black on white. His signature includes a W/T for Winnebego/Tiwa (his tribal affiliation—Isleta is a Tiwa Pueblo) and an ear of corn and a mountain lion track for his clan affiliations. This is on page 85 of our Second Edition of Southwestern Pottery, Anasazi to Zuni.. 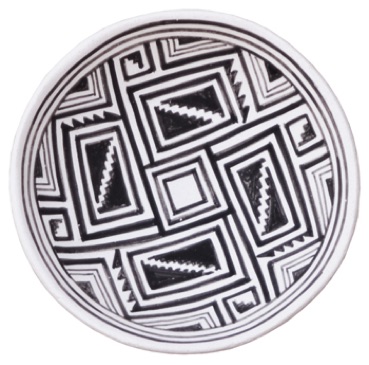