We'll probably never know the whole story of this piece. People who've studied Hopi for far longer tha we have tell us that it's a 19th-century Hopi piece. If they're right, we feel it could well have been made because Thomas Keam told a potter what to make as a tourist souvenir, or even to satisfy easterners looking for "authentic" Indian art. Several things make it unusual, especially if it's as early as has been suggested. It doesn't have a Polacca slip, which normally would make it pre-1900. It has a rather un-Hopi determinedly "Indian" design. (Maybe the rain clouds are okay, but the crossed arrows are way too much. Highly unauthoritative sources say they're a universal Indian symbol of friendship, but we can't remember ever seeing them on anything from Hopi.) This has spalls that reveal an Acoma-type Kaolin clay, but we know they had, and have, some of that around Hopi, too. And it has what might be  potter's symbol on the bottom, but it's so scraped around and obliterated by the firing that it's hard to tell. Too many questions, too few answers. However, we can say this for sure. It's a weird old Hopi piece. If it's Hopi. It's on page 200 of the Second Edition of Southwestern Pottery, Anasazi to Zuni.

Condition not bad for something this old that's been knocked around a bit. 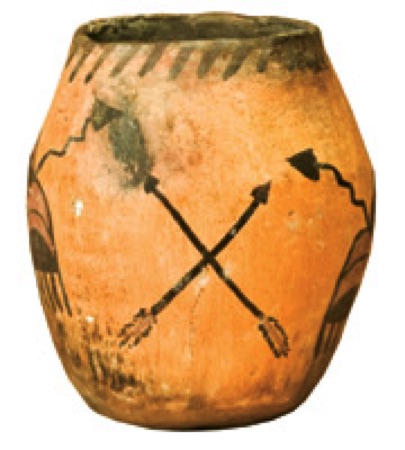 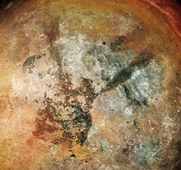 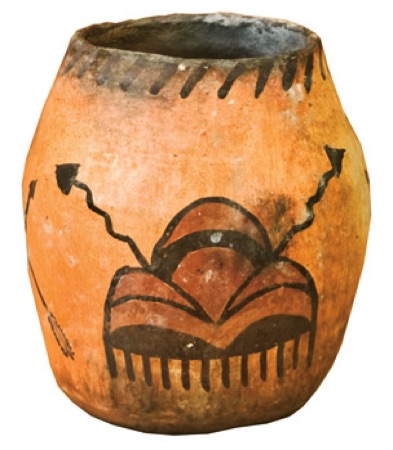