If you asked, "Who's Acoma's greatest living potter?" a lot of us would answer "Rebecca Lucario" without giving our answers a whole lot of thought. She's the leading member of the modern Lewis family. Rebecca and her sisters, Jucy Lewis, Diane Lewis, Marilyn Henderson Ray, Corrine Garcia and Carolyn Concho, are the core of Acoma's current leading family, grandchildren of the matriarch Dolores Sanchez, who taught Rebecca. Rebecca's awards go on forever. They include Best of Show and Best of Division at the 1991, 1994 and 2000 Indian Markets and the 2000 Gallup Ceremonial. We don't see a lot of her pieces for sale simply because when people get one, they hold on to it. Adobe Gallery's site quotes her as saying she loves making pottery because "it makes me create and use my imagination." It's an imagination that can create this unfortunate Mimbreño serving as lunch for a really big fish. Schaaf's encyclopedic Southern Pueblo Pottery honors Rebecca with a full page, and she's well represented in our Southwestern Pottery, Anasazi to Zuni First and Second Editions.

on close examination. Both have been touched up. 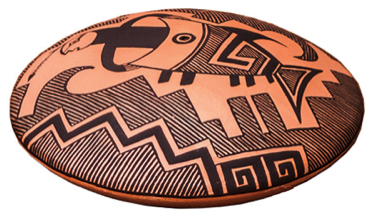