These purely-for-the-tourist cream pitchers appeared at Acoma in the 1950s and 1960s. The clay, decoration and colors are pure traditional Acoms, and the hasty manufacture is typical of Acoma tourist ware of the period. Our attribution to Mabel Brown, a potter we know almost nothing about, comes from Schaaf, who says she was active 1950— and noted for cow pitchers, and from Dillingham's 1992 Acoma & Laguna Pottery, which tells us that she'd made cow cream pitchers "for decades." That's about all there is in Dillingham, but Schaaf says in his 2002 Southern Pueblo Pottery, that they met her at a fair and bought one of her cows. At the first opportunity, we'll ask Greg for his opinion on this one. We've never seen a signed Mabel Brown piece and we've only been able to find one picture of a signed one, and it wasn't a cow pitcher. However, the painting and finish on that piece seened a lot like the finish on this one. The cryptic partial word under Acoma N. Mex. in the signature doesn/t help us with our attribution. Mabel or not, these cows have a special place in our hearts. It's hard to start the day in a bad mood if you wake up to one of these sitting on the breakfast table. This is a good-sized example in good condition. The minor spalling and fire-clouding are typical of the period, and its condition is otherwise excellent.

Condition as good as you could expect considering its age 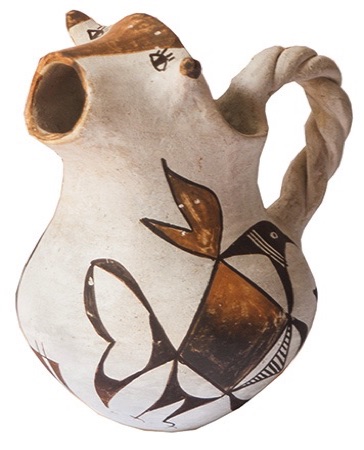 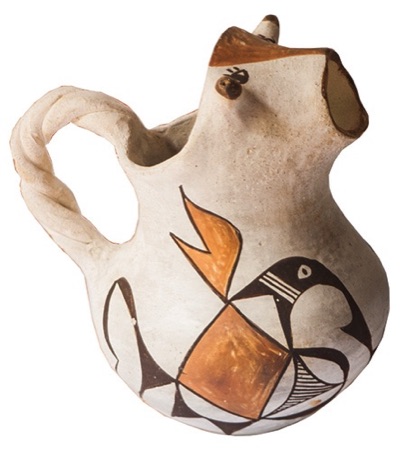