This is one of those unsigned seated figures that, according to Babcock & Monthan's The Pueblo Storyteller, were made by Cochiti potters between 1920 and 1960. They kept making them for another 20 years or so after that. We had trouble attributing this until we saw a piece in Santa Fe with the same bean eyes, facial tattoos and strained mouth signed by Felipita Trujillo. A lot of potters at Cochiti were doing pieces like this back then, but the facial features are so distinctive, we feel there's a strong, almost certain probability that this is Felipa's work. His pose suggests he might have been holding something, but it's hard to guess what would fit other than a single storyteller child, and if that's the case, this would have been the only storyteller with an unattached child that we've ever seen. His arms are too close to his chest to hold the bread bowl, jar or plate that these figures often held. He's a mystery, but he's a good example of post-World War II Cochiti figurative pottery. 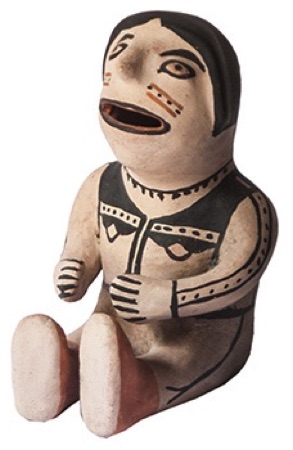 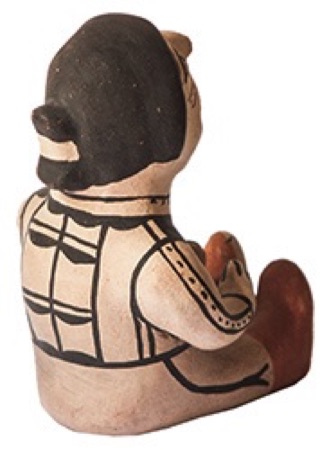