Yes, we specialize in the old and unusual, but we'll make an exception every now and then. When we find a striking piece by a new artist, we can't resist it. This is neither old (made in 2014) nor particularly unusual (at the time we acquired it, we had three other shallow pieces with an image of the Pahlik Mana kachina on our site), but it's a fresh interpretation by a promising artist. It's not that these kachina-face dishes are all that common. The four we've had on our site are the only four we've been tempted to buy over the past 20 years. Joshua Namingha was 21 when he made this. He's in the Grace Chaqpella family, and he learned the art from Mark Tahbo and Jake Koopee, two of the greats. We highlighted this on page 82 of the Second Edition of Southwestern Pottery, Anasazi to Zuni. 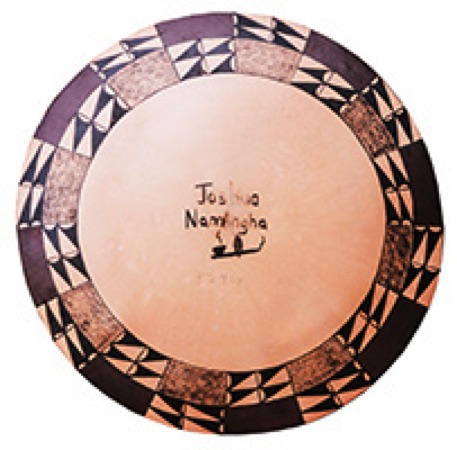