TESUQUE BLACK ON RED PITCHER circa 1890

We love 19th-century tourist ware, and we especially love it when it's made the same way they made the good pieces. The black on red treatment and the natural clay brown underbody could be San Ildefonso, but we're calling this Tesuque because the black designs float in the space. A similar piece from San Ildefonso would probably have had a more formal design that was connected to the framing lines. Also, at the tilme this was made, getting to Tesuque was a lot easier for the Santa Fe traders than getting to San Ildefonso, so most of the tourist ware they featured came from closer-in Tesuque and Cochiti. This pitcher had some less than careful handling and collected a few surface scratches that received a loving Carol Hayes touchup. It now looks pretty much like it did when it was new, because aside from the scratches, its surface remained almost pristine. The paints on San Ildefonso and Tesuque red on blacks from the period are sturdy, and when they're well fired, as this pitcher is, they hold their rich colors through the years. Whoever made this knew she was making a tourist piece and was casual about its symmetry and painting, but she really knew how to make pottery. Its polish and firing are as good as turn-of-the-century Tewa black on red ever gets. An important piece of history.

Now, pretty close to excellent condition. Insignificant chip on base. 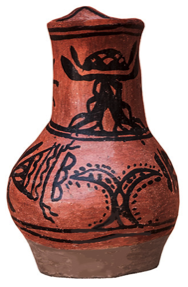 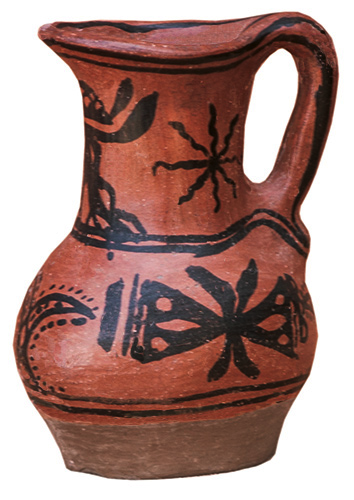 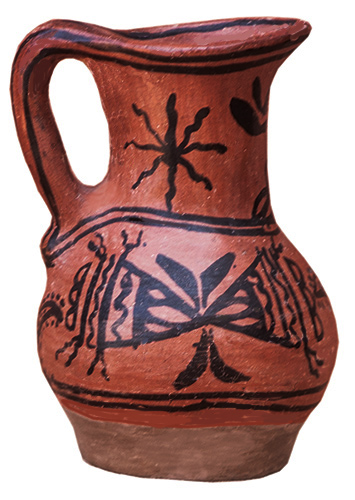 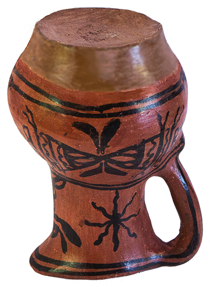