This is what dealers have come to calling a "child's olla"—shaped and made just like the eleven to fifteen inch ones, just smaller. This was sold to us as Acoma by a dealer who bought it a couple of decades ago from a member of the Lummis family. Charles Lummis was a newspaperman who in 1884 walked across the Southwest from Ohio on the way to his new job as a reporter for the Los Angeles Times. On the way, he fell in love with the Southwest, and in 1886 returned to Isleta, where he became an Indian rights activist. He came back to Los Angeles in 1894, organized the western branch of the Archeological Institute of America, helped found the Southwest Museum and placed his collection there. It was one of the first important museums devoted primarily to Native American culture.

Charles Lummis knew what he was looking for when he gathered pieces for his collection. The family connection is no proof that Lummis actually collected this, but we think it's exactly the sort of piece he would have collected: a pure example of one Pueblo's art. Although these days the tendency is to attribute unprovenanced pieces like this to Acoma, everything about this one cries out turn-of-the-century Laguna—the heft, the temper and especially the design, loaded with elements that Evelyn Cheromiah identified as ancestral Laguna. If it weren't for the Lummis association, we'd have put a 1900 date on it, but by 1900 he was back in Los Angeles.

This has had a bit of a hard life, When we got it, it was really dirty and had suffered minor chips and dings arond the rim. We washed it and fixed the rim, and it now looks more like it should. If we're correct about Laguna (and we'd bet we are), this is an excellent and really scarce example.

Condition very good for its age. No restoration except for repaired minor rim chips.

The little nicks on the body of the piece are as they were.. 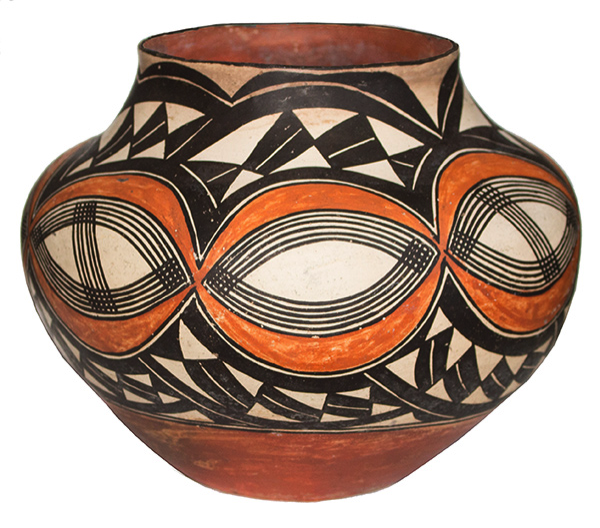 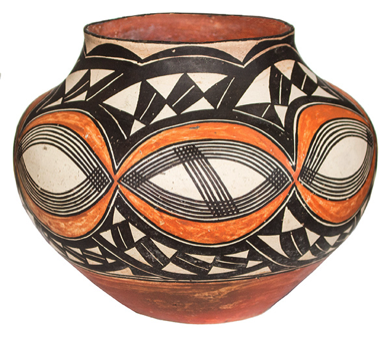 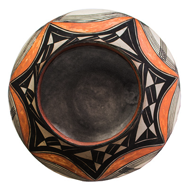 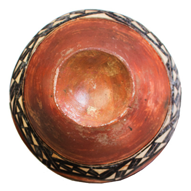