Like several other pieces on the site, this full-sized olla rates one of our special interest green dots more because of who did it than for the piece itself. Verda Mae Shields, who married one of Dolores Sanchez's grandsons, is forgotten today, but this pot tells us she was a serious potter, and says a lot about the family she married into. When we wrote the Second Edition of Southwestern Pottery, Anasazi to Zuni, we placed Dolores Sanchez (1888-1991) alongside Lucy Lewis, Marie Chino, Jessie Garcia and Juana Leno as an important Acoma matriarch, and today, perhaps the most relevant. Dolores's daughter, Ethel Shields (1926– ), is mother and aunt to today's Acoma pottery royalty: Rebecca Lucario, Charmae Shields Natseway, Delores Aragon, Carolyn Concho, Judy Shields, Diane Lewis and Sharon Lewis. Ethel's son married Verda Mae, and although Schaaf's Southern Pueblo Pottery has her active only from 1990 to the present, this is clearly dated 1977. The family and the date clearly explain this piece. Dolores Sanchez was still very much alive in 1977, and this is exactly the kind of jar she would have made. Normally a well made 40-year-old large olla in this condition would be priced in the $800–$1,000 range, but we bought this for much less for an obvious reason. Back when it was new, in the fashion of the day, a clueless owner decided to "antique" it by painting the rim and shoulder with orange shellac. Fortunately for the pot, rubbing alcohol dissolves shellac, and it wiped off effortlessly, leaving the piece in almost-new condition. As are many of our pieces, it's a bargain because of its history. 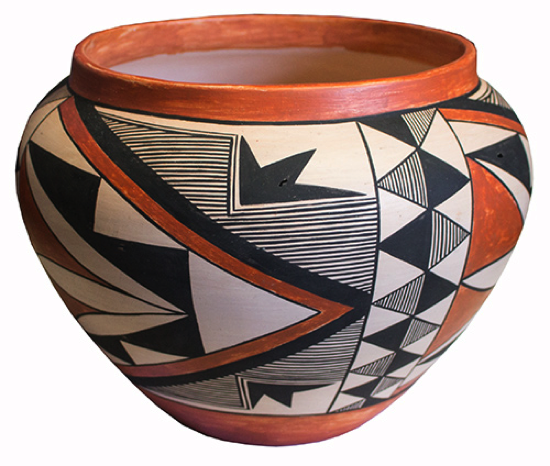 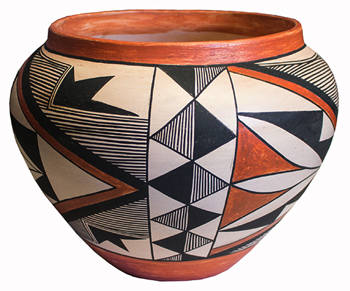 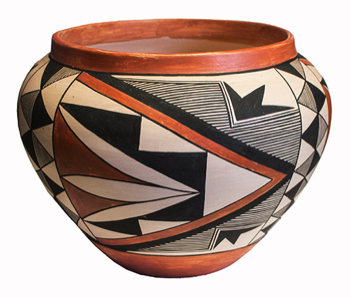 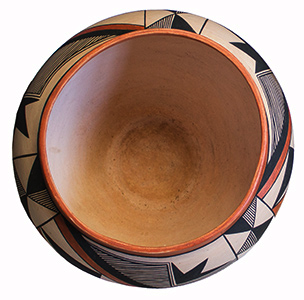 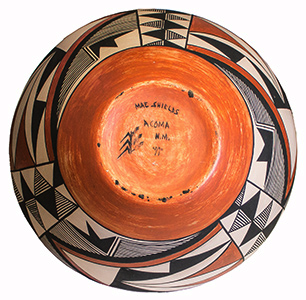 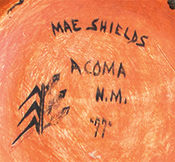 Before we cleaned off the shellac 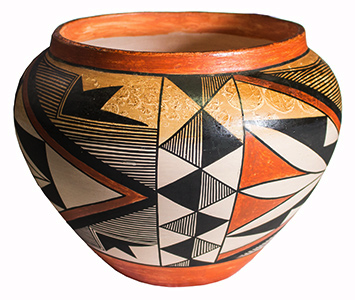