If you follow the art, you might wonder why we put one of our collector's special interest green dots on a Navajo jar that looks like hundreds of others made over the last two centuries. Simple answer: it's the best one we've ever seen. It has the traditional earmarks—the broken snake fillet below the rim, the uneven firing, the vertical shape, the ring that comes from high-temperature firing. If you want an absolutely traditional early Navajo jar to round out your collection, you'll never find a better one.

The 1940 date is a guess. A previous seller called it a water jar and put "19th cent." on its price tag, but its condition is too good for it to have that kind of age. Also, while the really old ones tend to have a more pointed bottom, this has a flattened one. The old ones weren't made to sit on tables, they sat on the dirt floor of the hogan, and the flattened base points to a time when Navajos lived in houses and had tables. It could be newer than 1940 because most of the pre-World-War II pieces we've seen show a lot more evidence of use, but we settled on the pre-war date because of its size and care of manufacture. Its suitcase-unfriendly size alone makes it unlikely to have been made for tourists. After 1960, as the tourist market developed, the Navajos made a lot of little low-fired resin-coated jars that look like this and sold new for two-figure prices, most of them signed.

This isn't one of those. It's a real one.

Condition superb if we're correct about its age.

It was probably collected early and used very little. 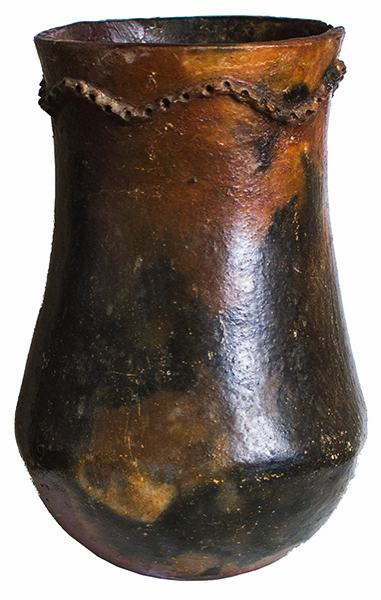 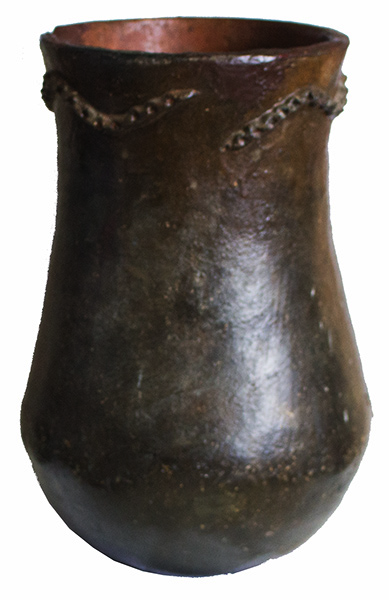 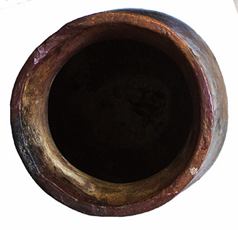 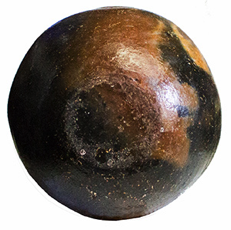 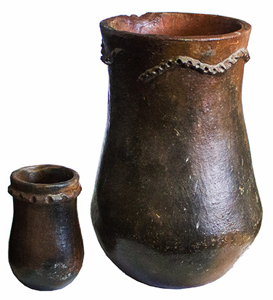 This explains why we don't think this is a tourist jar like the one on the left.