Not all stories have a happy ending. Kathy Pino was a superb Zia artist who lived in the shadow of her better-publicized sister, Seferina Bell. Sadly, Kathy had a stroke and stopped making pottery, but this piece tells us she didn't stop entirely. The shaky hand on the signature tells it all. We believe that she might have been Zia's most imaginative painter as well as one of the most skilled during the mid-20th century, and we continue to search for her pieces. During her early years as a potter, she mixed her clays perfectly, and unlike other Zia potters of the period including her sister, her pieces didn't spall. Her early pieces used a tan/orange slip and gray paint instead of brown or black, and we've used those characteristics as an identifier for her. Later, probably because of market pressures, she switched to pure white backgrounds and black paint, often with the rainbow you see here on larger pieces. We show a white 1991 jar in the Second Edition of our Southwestern Pottery, Anasazi to Zuni, and it has all the skill and imagination of her earlier pieces.

Kathy's work almost never appears in books other than ours, and we we've learned about her in small bits and pieces, most recently by viewing an admirer's collection gathered in the 1980s. There are a couple of late pieces in Bill Mercer's hard-to-find 1995 Singing With the Clay, published in connection with an exhibit at the Cinncinnati Museum of Art. But nowhere is there anything like this: unsure painting and an oversimplified version of a standard Zia bird.

We think of Kathy as Zia's greatest ignored potter, and this piece saddens us. What we're left with is a good-sized traditional Zia olla that will look nice on a shelf and serve as a reminder that greatness is fragile.

EARLY KATHY PINO BIRDS: The second and fourth appear in Singing with the Clay. The others are from pieces we've owned. 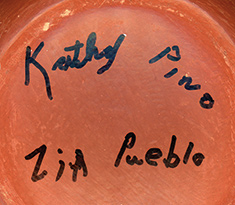 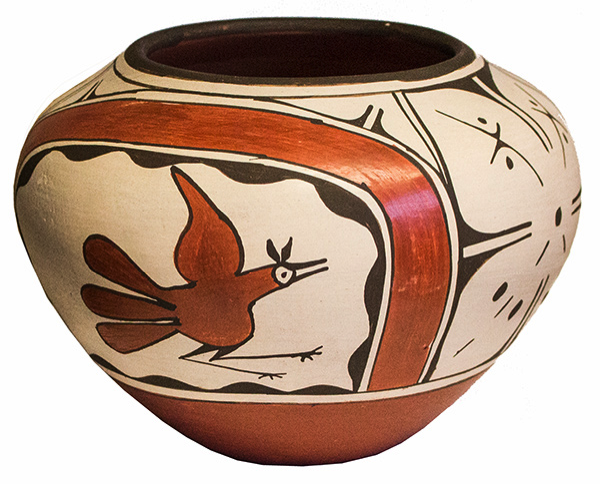 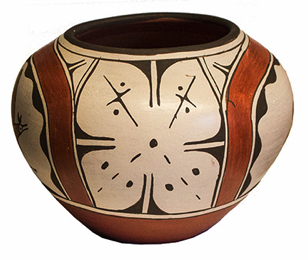 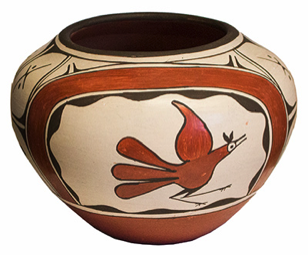 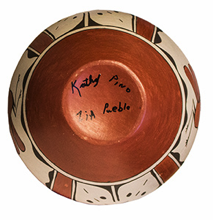