According to Guy and Doris Monthan's authoritative 1979 book Nacimientos, the first Pueblo-made nativity sets occurred in the late 1950s. The book suggests Manuel Vigil of Tesuque as the first artist to make them, and states that the large number of them that appeared in the 1960s and 1970s came primarily as a result of urging by major collectors such as Alexander Girard, whose collection provided the foundation of Santa Fe's important Museum of Folk Art.

These two pieces say otherwise. They appear to be what's left of a full, easily breakable set, and they have all the characteristics of quick-and-dirty Tesuque tourist pottery o f the early 20th Century: undecorated and unfired, casually formed and covered with the white slip that showed up on most rain gods of the period. It's a minor miracle that they survived unbroken for more than a century.

If your collection could use a piece of implausible history, these should be at the top of your list.

Probably just about what they looked like when they were new. 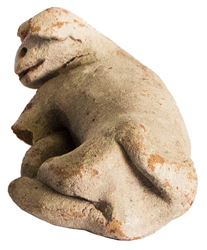