Daisy Hooee, daughter of Nampeyo's eldest daughter, Annie Healing, was both a great potter and a fascinating biographical subject. She lived much of her life at Zuni, first marrying the jeweler and fetish-carver Leo Poblano and, in 1948, Sidney Hooee. Although she was a celebrated Hopi potter from the most important pottery family, she spent her later years at Zuni High School teaching young Zunis how to make their traditional pottery. There's a pure traditional Zuni jar by Daisy on page 191 of the Second Edition of Southwestern Pottery, Anasazi to Zuni, and on the page opposite, a remarkable piece on which she dangled two pure Zuni frogs from the rim of a pure Nampeyo bowl. Here, she made a little ladle with a nod to the whiteware that Joy Navasie and her siblings were popularizing. We're told that one thing that kept Daisy bonded to Hopi was that in later years, she painted for her elder sister, Rachel Namingha, as Rachel's eyesight failed.

The fact that Daisy had her foot in two Pueblos is only a small part of her life story. Eye problems ran in the family, and her grandmother Nampeyo's increasing blindness had a deep influence on the development of 20th-century Hopi pottery. She compensated by having her daughters, granddaughters and nieces including Daisy and Rachel into her working circle. Daisy's eye problems came early, and a visiting wealthy Californian, Anita Baldwin, took her to California for treatment while she was in her teens. Then, captivated by Daisy's obvious talent, Ms. Baldwin sent her to study at the Ecole des Beaux-Arts in Paris, an education few other Pueblo potters can claim. She came back to Hopi in the 1920s and returned to pottery-making with her mother Annie and sister Rachel.

This little ladle is a bit off-center for Daisy's work. The off-white color is untypical, but she was a master of many genres. There's a pencil notation on the back that tells us she made it June, 1974 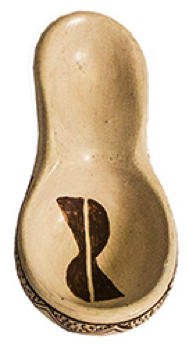 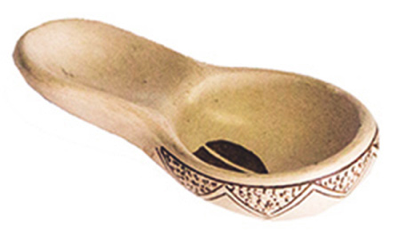