Most important pottery-producing Pueblos have a dominant family with a single member leading the way—Nampeyo at Hopi, Maria Martinez at San Ildefonso and Lucy Lewis at Acoma. At Jemez, you have to look to Glen Fragua. When Glen was a little girl, Jemez pottery was dismissed as somewhere between nonexistent and irrelevant. Jemez is now considered one of the leading pottery producers, and one of the big reasons is Glen's leadership. She learned the fundamentals from her mother, and by the time she was 16, she was experimenting with her own incised style. She made her pots in the traditional way, with hand-gathered clay tempered with volcanic ash. Her only concession to modern technology is kiln firing. Her pieces are totally within the hand-done, no-shortcuts tradition, but she probably had her fingers crossed on this one. The metallic copper touches bend the rules a little.

Over the years, other family members like B.J. and Felicia Fragua have made pieces that rank among the finest pieces to come out of Jemez. For proof of Glendora's long-lasting influence, look at page 91 of the Second Edition of our Southwestern Pottery, Anasazi to Zuni. It shows a jar she made in 1983 with her husband Dennis Daubs, a piece at the cutting edge of Jemez art at the time. Then turn to page 93 and compare it to an egg like this she made in 2010 and with the new pieces by other family members. Her leadership has been constant for more than thirty years.

There's a penciled price of $594 written on the base. We'll reverse the numbers and settle for a bit less. 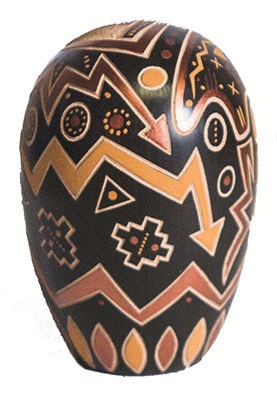 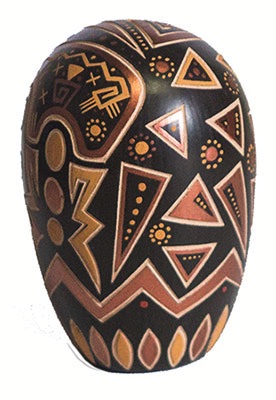