WHERE TO CATCH UP WITH US NEXT

HAS BEEN CANCELED, AND SO FAR, THERE'S NOTHING TO REPLACE IT.

Obviously, there aren't any.

Meanwhile, if you don't have our latest pottery book, you should probably pick it up. The publisher seems to have dropped it from catalog, but we still have a single signed copy left. Click on the picture for a description.

IT JUST WENT OUT OF PRINT.

THERE'S ONLY ONE SIGNED COPY LEFT!

After a two-year, Covid-induced hiatus, the big February Show at Fort Mason in San Francisco was scheduled to return, but not enough dealers signed up, and Kim Martindale suffered a big financial loss. There was talk of a smaller show in March to be held in a smaller space at Fort Mason, but that fell through as well.

It's the end of an era. Time was when that show, in its previous incarnation as the Marin Show, was the biggest and most important event of its kind in the world. I can only hope that new shows will come along, and we'll be able to get out in the world. The Martindale Santa Fe shows will be in August as usual, but we won't be able to exhibit. We can only hope new local shows will come along, and if one does, we'll let you know. 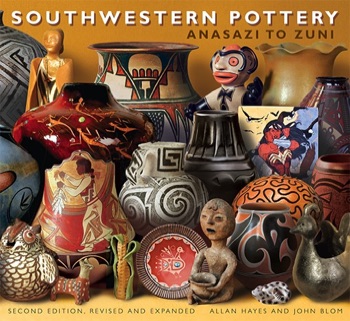